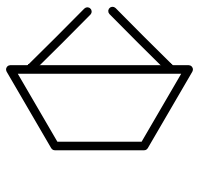 The company founder Ernest Morton Barker was born on Adelphi Street in 1880. His father was John Barker who worked in Sheffield as a table knife cutter, having followed in his own father's footsteps. Ernest Morton Barker had other occupational ideas. At the age of 14 Ernest served a six year cabinet makers apprenticeship.

Following his apprenticeship, five years would pass before, in 1905, he set up a partnership with William Owen, trading as cabinet makers from the Crookes area of Sheffield. 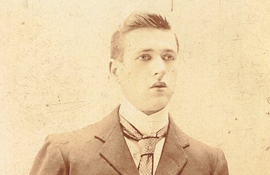 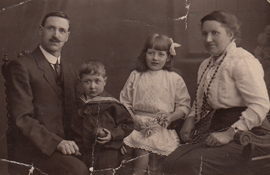 He traded independently as a cabinet maker from premises on Bradfield Road before finally moving to 1 Burnaby Street (Hillsborough) in 1915 and setting up home and shop as ‘Barkers’ selling draperies. This dramatic change in profession could be explained by the outbreak of World War I. At this point Ernest and his wife Maud had a young family to support and times were tough for everyone. His daughter Alice Barker was just eight years old and his son Ernest William was six years old. Starting a small family business at such times probably involved all four members of the family helping in some way or another.

In 1921 Ernest took number 66 Fitzwilliam Street, where Barkers changed focus to trading furniture. A second store followed on Hillsborough Road and the Fitzwilliam Street store was extended. Initially furniture was delivered in a hand cart. It's hard to imagine now having to pull a hand cart with furniture on up Stannington Road, which is exactly what did happen. Barkers offered their own credit facilities in these days, as did many stores. Customers would have a little book and come into the store every week to pay something off. When their payments were starting to run low they would normally add something else onto the book. Paying 'on the tick' was popular for many years before finance companies became heavily established and took over the crediting of customer orders. 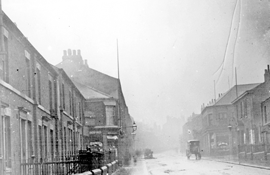 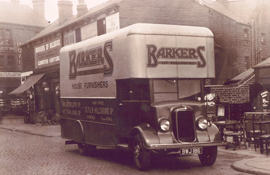 In the 1930's Ernest William Barker and his sister Alice Barker, took a more active role in the company and Ernest had a son (young Ernest Stuart Barker, known by his middle name of Stuart). Further stores were opened on Attercliffe Road, Firth Park Road (now Stubbin Lane), Ecclesall Road, The Moor and Infirmary Road. The company now had a modern van to do all the deliveries. All this progress came to an end on the foreboding Sunday of 3rd September 1939, when Britain declared war on Germany.

In 1940 World War II started to have huge consequences for Sheffield. Barkers closed the shops on Attercliffe Road and Infirmary Road. The shop on The Moor was bombed on the 13th December 1940. Ernest William Barker was enlisted and went to fight in Burma and the delivery van had to be handed over to the Military Department - as they wanted to use it for the war. After the war the family reduced the operation to stores at Hillsborough and Firth Park, where deliveries were taken out on a trailer attached the the family car. It was a constant struggle to get enough fuel to deliver customer goods with fuel heavily rationed. 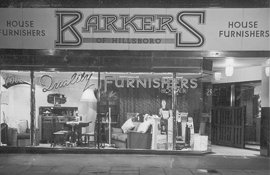 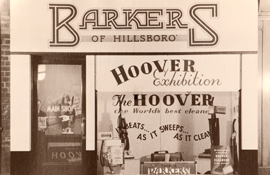 For anyone who remembers, the 1950's were difficult years. Sheffield had been heavily bombed and many areas needed rebuilding. Food rationing went on until the middle of the 1950's. It was largely a period of consolidation for Barkers Furniture. The only additions were a small Hoover shop and a compact bed shop on Middlewood Road, which Ernest's wife Phyllis ran.

In the 1960's Stuart Barker joined the firm in his thirties. He had his own ideas and pursued them with determination. His ideas on showroom design are evident by the expansion of the Hillsborough Road store and the introduction of stylish black arch show windows. The Hillsborough Road shop really did have a strong presence in the center of Hillsborough. Stuart's timely intervention in the business was fortuitous. His own father, having fought in Burma during the war, was now in his 50's and benefited from the enthusiasm of a young son joining the firm. 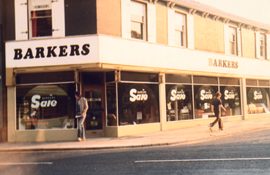 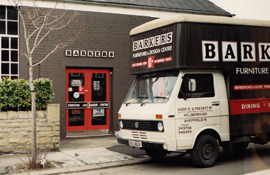 During the 1970’s Stuart put more and more hard work into the business. He arranged the purchase of one large site occupying adjacent buildings on Dodd Street and Trickett Road. He then undertook a five year labour of love, designing and building the innovative room sets at Trickett Road. The Trickett Road building was finally opened to high acclaim in 1976 - replacing the two redundant small shops on Hillsborough Road and Firth Park Road. Not one to rest on his laurels, Stuart then started work on the Dodd Street building, which was initially just used for warehousing.

In the 1980's the Dodd Street building was opened - which gave Barkers a nice shop front facing the once busy Langsett Road. In 1982 Stuarts wife Sheila joined the firm. Having gained a lot of experience working under the Managing Director of one of Sheffield's leading firms, she set to work on streamlining the administration of the business. With Stuart's spark for displaying and marketing furniture and Sheila's acumen for office administration they covered most bases. Between the two directors they built a very strong team, consisting of Kevin Linton, Joan Slinn, Darren Jones and Angela MacDonald who still work at the firm today. Hours and hours went on getting the displays just right. During the 80's the only real set back was a fire at the former warehouse within the Hillsborough Barracks compound. This created a lot of extra hours for Sheila and Stuart whilst they sorted out the aftermath of the blaze. Our customers, who had furniture waiting to be delivered, were very patient whilst fire-damaged goods were re-ordered. The warehouse was re-fitted and within a few months business returned to normal. 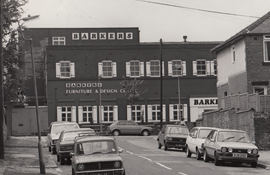 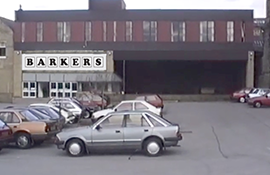 The 1990's years were a mix of great times and lessons learned. The company opened a huge store in Huddersfield but by September 1992 all the hard work that had gone into it was fruitless as Sheila and Stuart cut their losses and moved the store on. Sometimes things work and sometimes they don't - but Barkers has always kept trying new markets and new ideas. By the mid to late 90's the recession was over and the company was growing again. In 1999 Neil Barker joined Barkers and as in the past a bit of briddled enthusiasm helped.

In the winter of 2000 the Burton Street site was purchased to compliment the main shop. Initially purchased as a warehouse, Barkers decided it was too big to just hold customer orders, so we turned half of it into a bedroom showroom. In 2003 and 2004 half the site was re-built to extend the bedroom centre. Effort was concentrated into making the bedroom centre look like a modern, comfortable and well presented shop. The addition of a large carpet centre at the main entrance on Burton Street in 2006 gave another dimension to the company. As with all businesses the key is evolving over time. Certainly standing still is not an option. 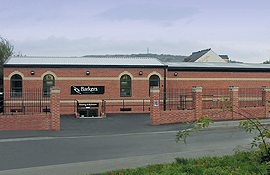 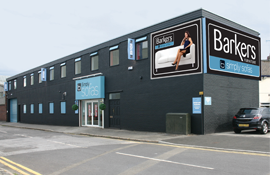 In 2011 Barkers Simply Sofas opened at Lowther Road, Hillsborough. The company felt it was essential to get a shop front on Penistone Road where the bulk of the areas traffic flows down. Simply Sofas was created as a more modern sofa store. The concept involved creating a more modern store but backed with family-run service and values.

2014 has seen a good friend of the family, Graham Stokes, research the family history. He has spent hours in Sheffield archives with a friend of his digging through records. Frederik Stuurman, a local historian, has provided further input and realised that while the company has been celebrating the birth of Barkers as 1931 that it was in 1915 that Barkers first became established. Graham picked this up and with his knowledge of our family and his findings has managed to be able to piece together a complete timeline. Graham has a historical interest in Barkers. His own father, Jim, worked at Barkers from the 1940's and Graham remembers fondly going out on deliveries with his father in the old van, which was then back from the War Department.

2014 also saw the redevelopment of the company website. This has enabled the company to logistically output most of the prices in the shop and do it in synchronisation with the shop floor. Feedback from customers suggested that this was a necessity and that pictures alone didn't give enough insight into products that they might purchase.

2015 is witnessing Barkers celebrating their 100th Anniversary. To further improve the business for customers Barkers have decided to make the Lowther Road store the Flooring & Bedroom Centre. Conversely Burton Street will become the Upholstery & Dining store. The feedback from customers has dictated the move. Customers sometimes have to travel between stores to look at sofas and as a sofa can be a once in 10 years purchase it is proving difficult for customers to grasp the difference in upholstery offers. 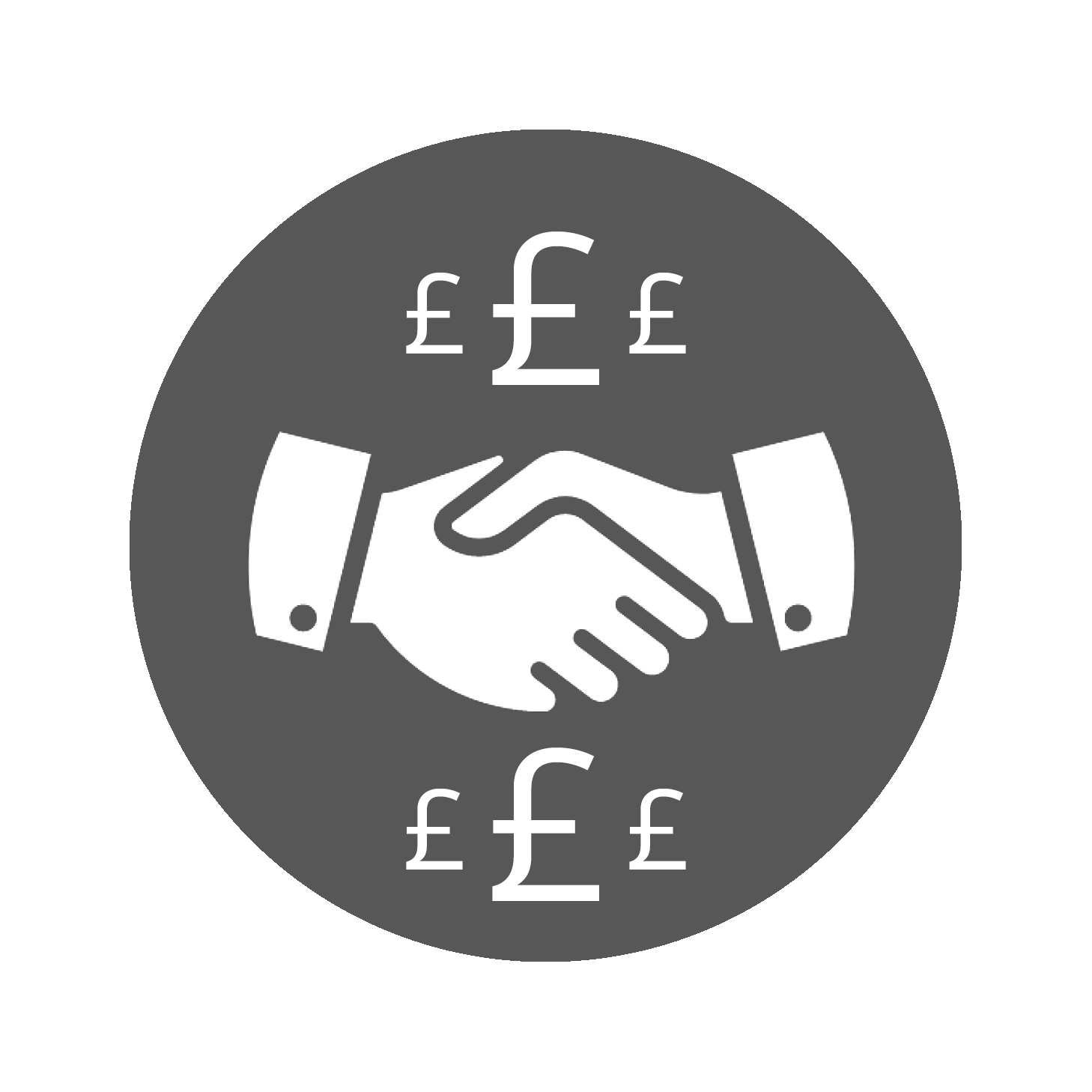 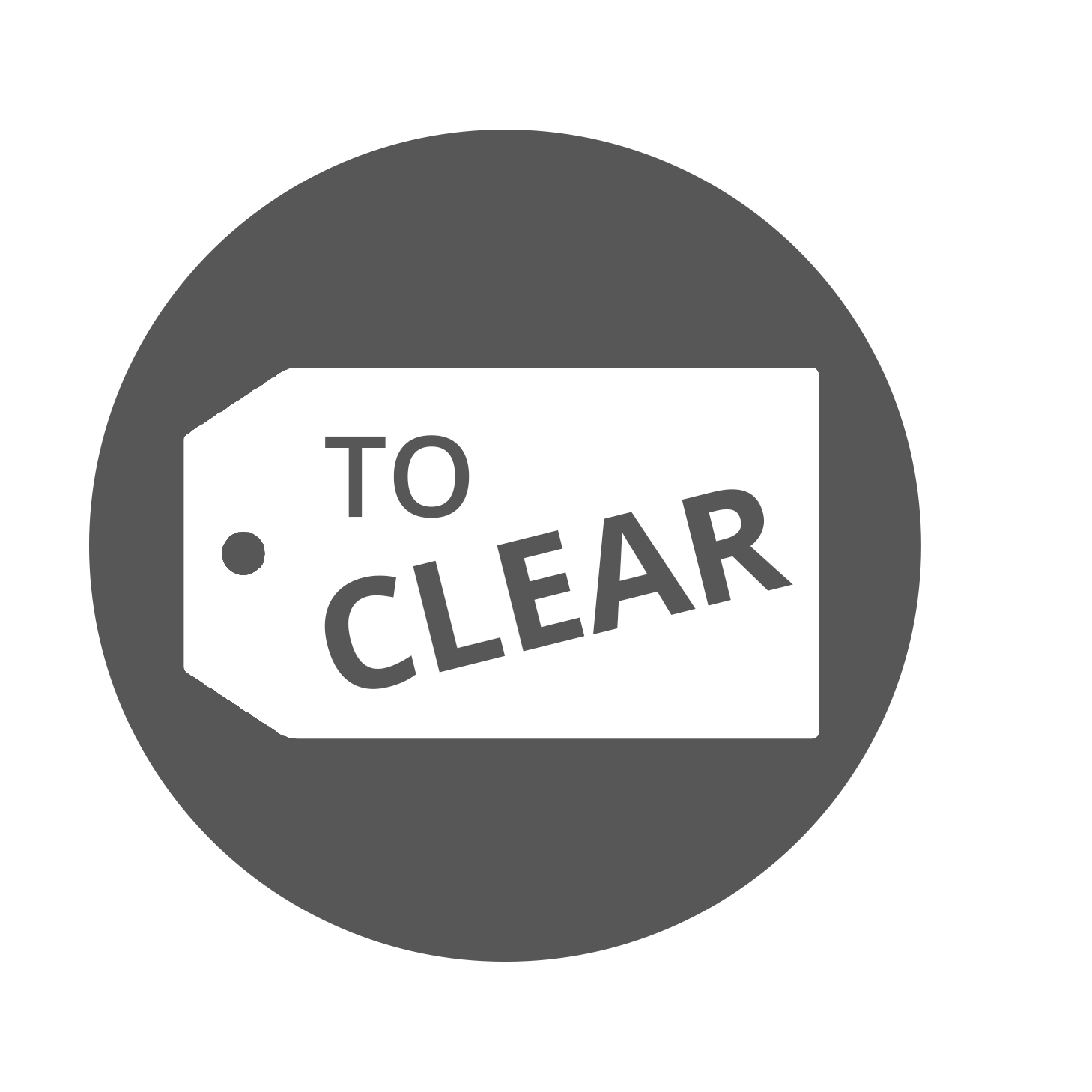 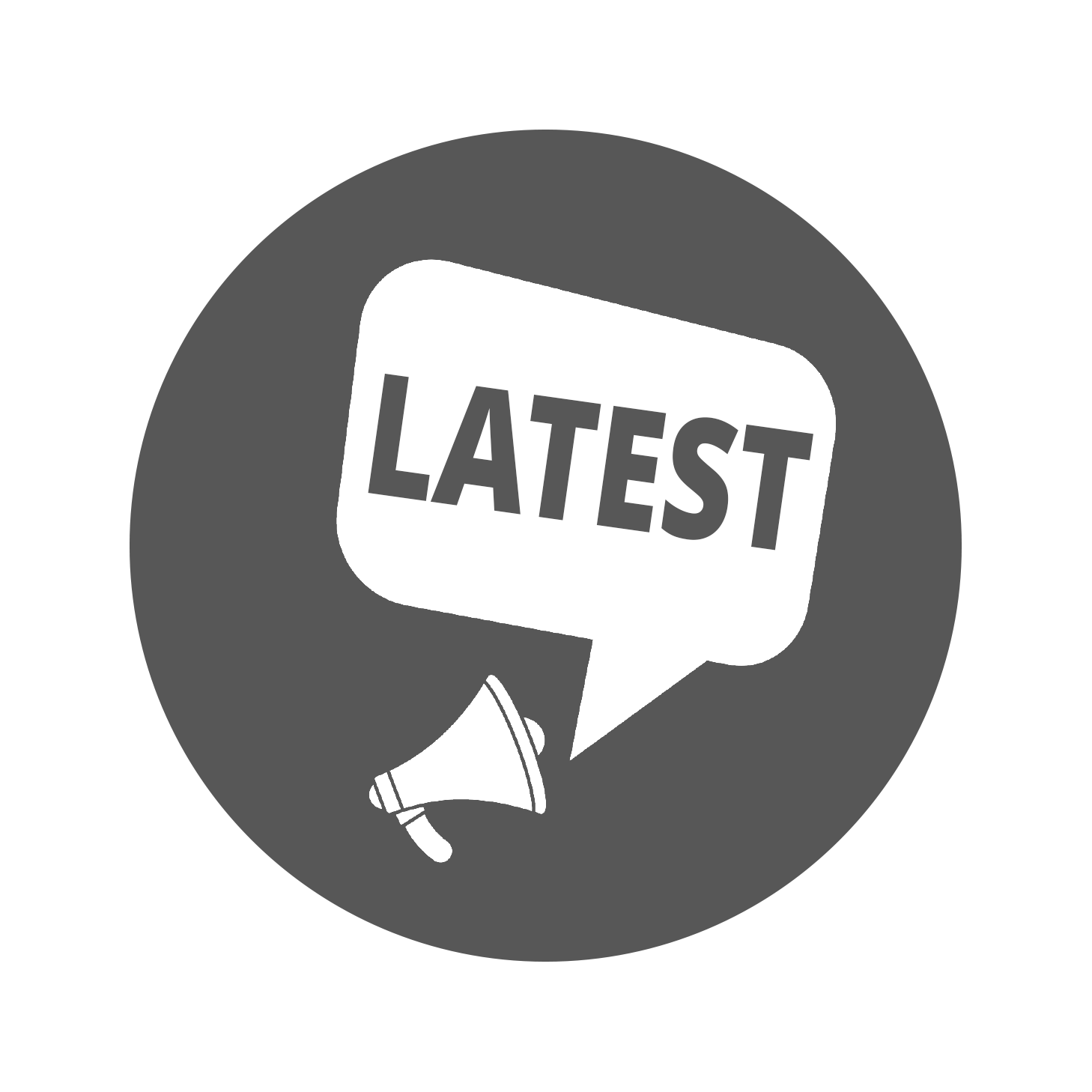 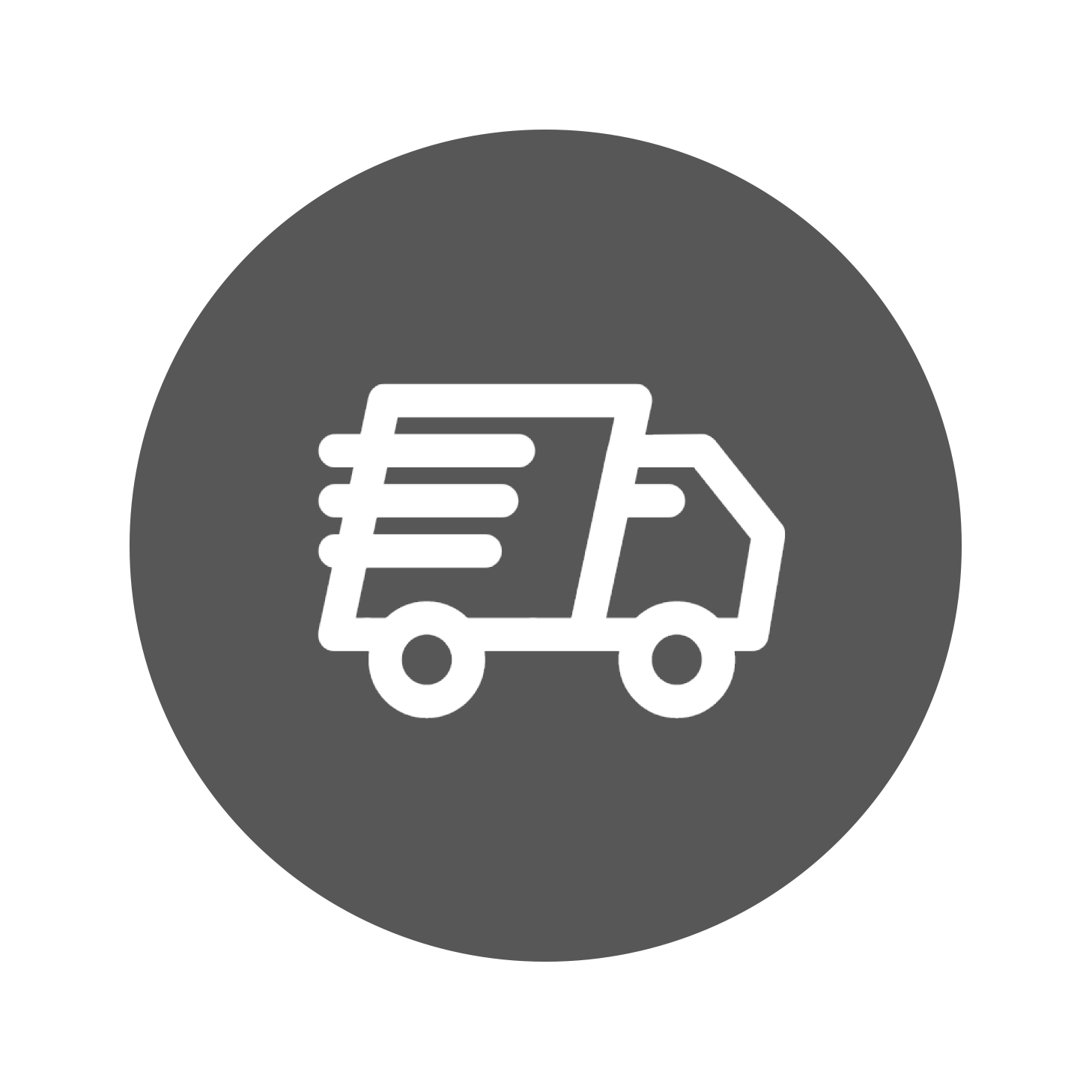 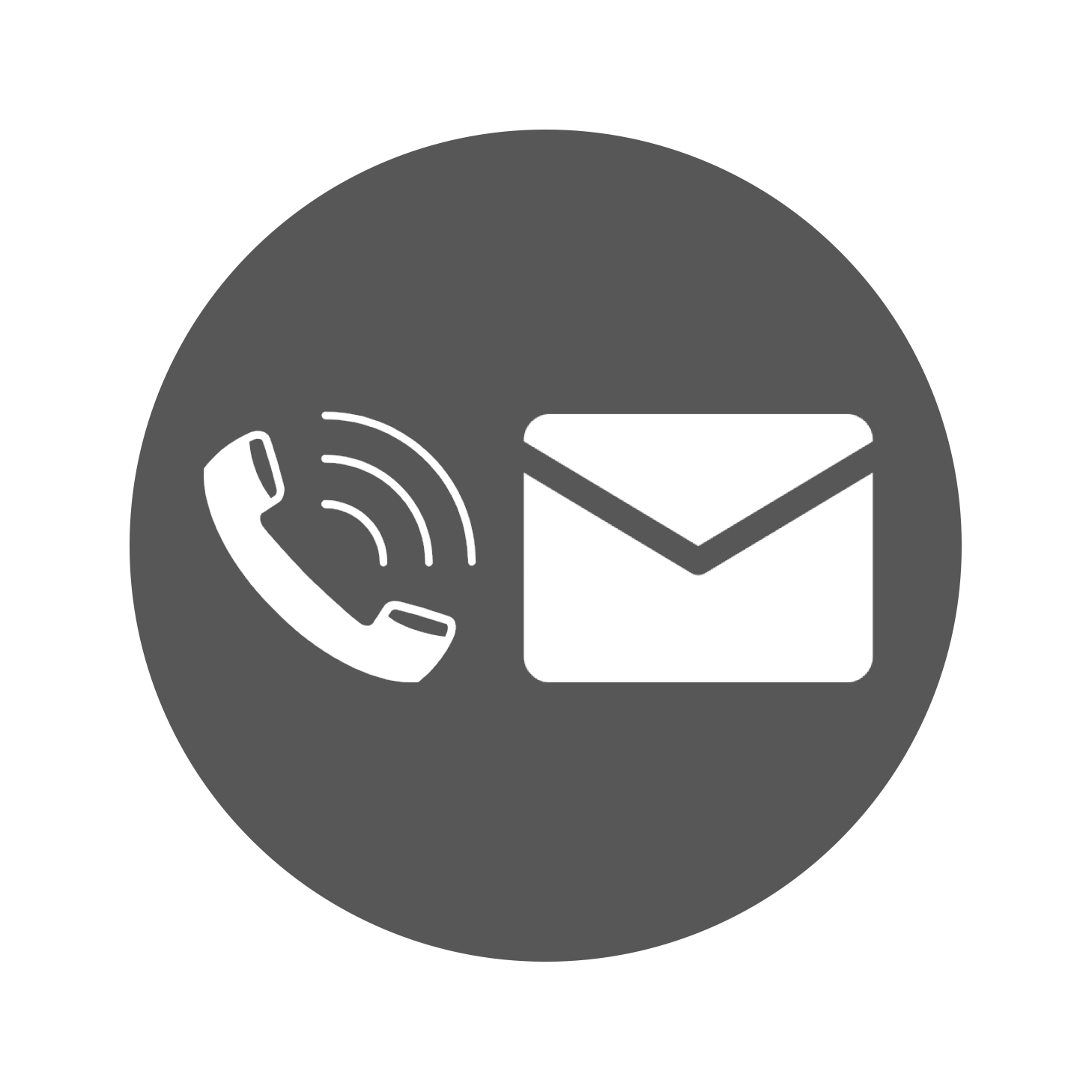 Please be aware that images are for illustration only. For example, suppliers only take images in one cover and the range might not be pictured in a middle price grade.